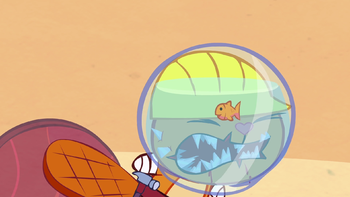 "The glass is always half full!"

"Shard at Work" is the fourteenth episode of the second (internet) season of Happy Tree Friends.

Handy is trying to change his light bulb despite having no hands. Frustrated at the fact, he tries to grab it with his teeth, but he ends up kicking off his ladder in the process of unscrewing the light bulb, sending his box of spare light bulbs crashing down to the floor. The beaver is still holding on to the light bulb until it cracks, causing its shards to cut his mouth and sending him back down to the floor where his backside lands right at the shards of broken light bulbs. Thankfully, the first-aid kit is close by, but unfortunately, his first step impales his foot right on a glass shard, causing him to hop backwards in pain until he bumps into a table. The fishbowl on it gets launched and falls onto Handy's head, adding another problem. He begins to desperately try to remove it, breaking his cupboard in the process. He bumps into a wall, and with that he finally has an idea of breaking the fishbowl by headbutting the wall several times. Despite various objects falling onto his head and shattering them, the fishbowl remains intact. That was until Handy fully suffocates and a feather gently lands on the fishbowl, comically shattering it. His pet fish remains fine, though, now swimming in a pool of blood in his mouth.

"Shard at Work" contains examples of: