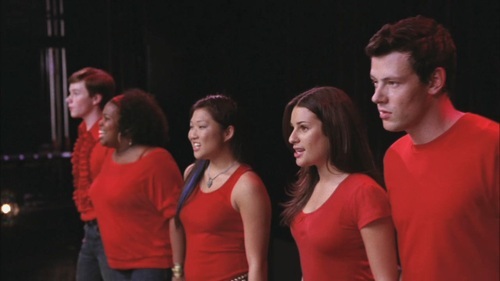 Welcome to Glee. A former National Show Choir Champion tries to inspire students and relive his former glory, collecting a Ragtag Bunch of Misfits comprised of some of the purest talent of the late '00s and early '10s.

We open in Lima, Ohio on September 21, 2009 with a routine by William McKinley High School's cheerleading squad, the Cheerios! Despite their high energy and intricate choreography, their coach, Sue Sylvester (Jane Lynch), isn't impressed.

The show now introduces us to McKinley's Spanish teacher Will Schuester (Matthew Morrison), the former National Show Choir Champion. He walks by Kurt Hummel (Chris Colfer), resident fashionista and secret Deadpan Snarker, being surrounded by the McKinley football team. Among them is quarterback Finn Hudson (Cory Monteith) and his best friend Puck (Mark Salling). Kurt manages to get Finn to let him remove his expensive jacket, tosses his bag over, and then gets acquainted with the contents of a dumpster.

We then see one of the Cheerios! posing in the air. This is Quinn Fabray (Dianna Agron), Head Cheerio. Will glimpses the trophy his glee club won in '93, alongside a portrait of its late director, Lillian Adler. We're shown the school's choir room, home of the dilapidated glee club "Rhythm Explosion". Its director is Sandy Ryerson (Stephen Tobolowsky), and he's at the piano, trying to teach the current leading man "Where is Love" from Oliver!. As they harmonize, Sandy's hand begins to go where it shouldn't, which Rachel Berry (Lea Michele), self-professed ingenue and bully-resilient aspiring triple-threat, sees.

In the teacher's lounge there is no coffee pot, made so by cost-saving extraordinaire, Principal Figgins (Iqbal Theba). Sue brings in some fresh store sups for four members of staff, the only ones she presumably likes. This introduces us to Coach Ken Tanaka (Patrick Gallagher), the emotionally awkward football coach, and Emma Pilsbury (Jayma Mays), the school counselor, who prefers pamphlets to confrontation. Ken, clueless as to Emma's germaphobia, tries to hit on her unsuccessfully while Will succeeds unintentionally, causing Ken to begin to view him as a spiteful love rival. They discuss how someone tattled to Figgins about Sandy being inappropriate and so the glee club currently doesn't have a director.

In Figgins' office, Will offers to take over the glee club. Figgins laughs, asks if he also wants to captain the Titanic, then looks at the money and says $60 a month from Will's own pocket is the bill to keep it running. It cuts to Will in bed with his wife Terri (Jessalyn Gilsig). They were high school sweethearts who unfortunately went sour after putting rings on it. It is in bed that Will comes up with the name "New Directions", because even though it is a law of the universe that show choir names must be ridiculous, the previous name was a little too much.

Will posts a sign-up sheet in the hall and the first we see to brave adding their name is Mercedes Jones (Amber Riley). Immediately following is her audition song, some of Aretha Franklin's "R.E.S.P.E.C.T.". Next up is Kurt, singing "Mr Cellophane" and Tina Cohen-Chang (Jenna Ushkowitz), a wallflower who dresses as a Goth, though she herself is outgoing and happy. She signs up and also adds the name of her boyfriend, Artie Abrams (Kevin McHale) who's in a wheelchair and can't reach. Tina sings Katy Perry's "I Kissed a Girl", and Artie's audition is not shown. After this we come to Rachel signing up and putting a trademark gold star next to her name — then falling victim to a face full of corn syrup and crushed ice, the first of the trademark Glee slushies.

She begins to monologue over her audition tune of "On My Own", and we see her in Figgins' office providing her best distraught acting performance as she outs Sandy's dirty little secret, her real motivations being spite at Sandy's obvious and disgusting reasons for favoring the rather weak-voiced Hank over her. Then we get her backstory: she's the daughter of interracial gay couple Hiram and LeRoy Berry, who provided every advantage to her growing up. She then honed her talent by recording and uploading to MySpace, despite her audience being mostly hateful in the form of her classmates and led by the demeaning comments of the Cheerios. There's a short clip of the cheer squad watching her videos in the gym, laughing and commenting together. Quinn is at the helm with the laptop, flanked by her number two, Santana Lopez (Naya Rivera), the resident Snark Knight.

Rachel asks when rehearsals start, and we see the newly-assembled glee club's ill-practiced rendition of "Sit Down, You're Rocking The Boat", complete with jazz hands, white gloves, and choreography even a infant beauty pageant wouldn't touch. Not that we're going recruiting again just yet: first to Will and Rachel out on the bleachers. Rachel, tired of being laughed at, laments about how she can feel the clock ticking and how she doesn't want to graduate without something to show for it. She tells Will about her ambitions and her drive to mean something.

Will offers to find her a male lead who can lead with her, before being summoned to Figgins' office. Figgins decrees that if New Directions doesn't win Regionals then they're getting cut.

We go to Terri's job at a linens store. After berating a coworker, Will comes in with a sandwich; having mayo on it displeases Terri, because she doesn't want to get diabetes, because that means she's less likely to conceive. We see Sandy Ryerson berating a different worker, now a dealer of medical marijuana try to sell some to Will, slipping him a free sample to help him cope with having the glee club as his new charges.

Will attempts to convince Sue to let him recruit cheerleaders and talks to Emma. Sue lays out the caste system McKinley High uses: jocks and popular kids = penthouse, nerds = bottom floor, glee club = sub-basement. Emma suggests finding a leader, someone who kids will follow anywhere. Since the Cheerios! are out, Will tries to get the football team to join, but the reactions are less than stellar. Will's disappointed until he hears Finn singing in the showers. He establishes a plan to get Finn to join the glee club that isn't just asking nicely again: he calls Finn to his office and produces the pot he was given by Sandy.

Finn protests and we see his monologued backstory, too: his dad died in the Gulf War, mom Carole (Romy Rosemont) had to struggle, you get the point. Only cool thing was Carole's boyfriend, Darren, a landscaper who let Finn help. That was the first time Finn really heard music, and after the boyfriend dumped her, Finn made a vow to make her proud. Will offers Finn a choice of being given six weeks detention, or something else.

He joins the rest of New Directions on stage, singing some Grease with Rachel. Rachel is clearly smitten with him. Mercedes steps up and decries her lack of spotlight. Kurt calms her down by saying it's one song. Will hangs his head at how little his team is working, resorting to asking his wife for help. Will brings up wanting to take New Directions to Akron, specifically to Carmel High to visit their glee club, "Vocal Adrenaline". Terri asks how much it will cost and it seems they're about to start arguing about finances, but Terri changes the subject by calling him out for wanting to relive his glory days.

In the teacher's lounge, Emma watches Will put up a chaperone sheet. She promptly signs it. On the field, Ken is ripping Finn a new one for wanting to go with New Directions. Puck asks what's up, so Finn claims that missing practice is to help Carole recover from prostate surgery. In the lounge, Ken accuses Will of stealing his quarterback, Will says that this is really about Emma, Ken accuses him of wanting Emma for himself, storming off before Will can remind him that he's married.

The glee club arrive at Carmel, and Rachel asserts to Finn in the line for snacks that they should get together. Finn's in a relationship with Quinn, however. Also in the line are Will and Emma, who split a PB&J instead. Then the lights flash and the bells ding, the curtain goes up and we quickly see why Vocal Adrenaline would become New Directions's personal boogeymen for half the series.

Back at McKinley, Finn walks right into a paintball firing squad. Puck was apparently concerned about Carole and googled her troubles, learning something about basic anatomy and Finn is summarily "executed". Back at his place, Will walks in to see Terri, bubbly in hand, congratulating Will because she's pregnant. At the moment, she does manage to get Will to quit McKinley. New Directions are naturally aghast.

Emma convinces Will to have one session with her.

Cut to Finn's locker. Rachel has assumed control of New Directions and is trying to get Finn back. Finn quits New Directions, but not before Rachel says he shouldn't care what others think. In the meantime, Finn's happy that he can rejoin the football team, as are the rest of the team. Their way of welcoming him back? Kidnapping Artie, shoving him in a port-a-potty and offering Finn the first flip as they plan to roll him around. Finn pulls Artie out and calls them out.

As Finn is wheeling Artie away, he sees Darren touching up the green on the football field, accompanied by a familiar song. This gives him an idea. Cut to a bickering New Directions, as Finn and Artie arrive, Artie willing to procure his friends in the jazz band, Finn has the music. They still need a director, though. So in Emma's office, it's time for that career guidance appointment, and she pulls up a clip of Will's glee club winning Nationals. Unfortunately, instead of motivating him to stay, it reminds him his time's gone by and he needs to grow up. Emma tells him that the only life worth living is one you're passionate about.

We hear the now-Glee-trademark "Dadadada", forming the opening chords to Don't Stop Believin'. As Will stands in awe, we cut to Puck in the back of the auditorium and Sue, Quinn, and Santana at the balcony, staring down the group improved enough to be a threat.

Songs from the episode