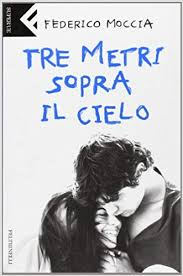 Three Steps Over Heaven (Italian: Tre metri sopra il cielo, which literally means Three meters above the sky) is an Italian novel by Federico Moccia. It was first published in 1992, but becomes hugely popular only with its reprint in 2004. Only one year before the success of Twilight, in Italy there was another popular teen romance novel, targeted explicitly at teenage audiences. The plot is basic: good girl falls in love with Troubled, but Cute boy.

Despite the popularity with the Target Audience in early 2000s, it was always a controversial work. It has an even more controversial sequel, Ho voglia di te ("I want you"). Both books got a movie adaptation, and a few years later a Spanish remake (Tres metros sobre el cielo) and relative sequel (Tengo ganas de ti) were released.