Literature / Inside The Worm 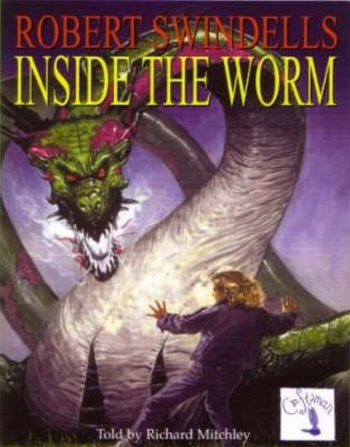 Inside the Worm is a 1994 novel by Robert Swindells.

As the small town of Elsworth nears its thousandth anniversary of the martyrdom of resident Saint Ceridwen, Mr Hepworth tasks Year Eight to stage a re-enactment of the Saint's banishment of the Elsworth Worm, and subsequent martyrdom by vikings. As the class arranges a cast of villagers and vikings, with Fliss Morgan in the role of Ceridwen, David "Trot" Trotter, Lisa Watmaugh, Ellie May Sutherland and Gary Bazzard begin work on a costume replica of the legendary dragon.

The ease of its construction amazes all involved. While Fliss reflects uneasily on the fatalistic appearance of this, the Worm's builders thrill at the remarkable ease with which they inhabit and operate it. Their shared thrall spurs them to acts of mounting hooliganism. The thrill is so intoxicating that their strangely shared view through only two eyeholes hardly seems to matter...