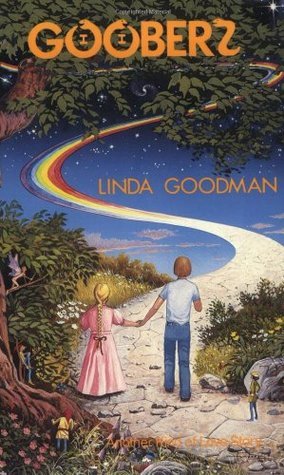 Gooberz is a massive semi-autobiographical poem published in 1989 by astrologist Linda Goodman. Split into twenty one cantos, the poem entwines significant events in her life with her religious and esoteric beliefs. After dedicating a third of the book to her eventful childhood and adolescence, the narrator shifts the main focus of the story onto her two main relationships (one with her unfortunate Gemini husband and the one with her much younger Leo paramour) and on coping with the debilitating agony of losing them both. After the deaths of their three children and her husband's infidelity, the narrator's marriage dissolves and they move to different places. Shortly after, the ex-husband dies, leaving the narrator paralyzed with grief and regret and obsessed with contacting him. After a prolonged period of mourning, she believes she has found him in the body of a younger, mysterious man whom she meets by chance in a bookstore. They have a passionate love affair, but ultimately he breaks up with her and leaves, marking the beginning of another agonizing period of grief for the narrator.

The purpose of the book, according to the author herself, was to offer a message of hope and to comfort those who have suffered a bereavement. In the almost three decades since its publishing, some aspects of the book, in particular those related to esoteric topics have become very dated - still, the book has its own quiet but dedicated fanbase among the author's following.

This poem shows examples of: