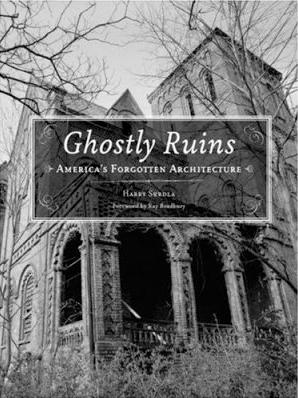 A Photography and Illustration coffee-table offering by Harry Skrdla, this nonfiction book is precisely what its title would suggest—a collection of images of once-grand buildings and other locations around America which have been allowed to fall into disrepair, decay, and in many cases outright collapse, leaving only ghostly remains. Divided into sections showcasing different elements of society (Transportation, Industry, Commerce, Public Works, Home, and Amusement) as well as sections on places which managed to be saved and restored (Reincarnation) and ones which sadly no longer exist (Epitaphs), the book is a remarkable collection of black-and-white photographs from the author's personal files as well as collections from all around the country, both vintage ones from the locations' heydays and more modern ones depicting the decrepit states each was allowed to slip into. Each location is described, relating how and why it was built, what purpose it once served, a portion of its history, and what forces eventually brought it to its ruined condition.

Described within its pages are the following locales:

The author generally presents each location and its photographs on their own merits, although he's also quite good at atmospheric flavor text and setting a scene. Despite the book's name he also tends not to suggest any of the places might be haunted, instead allowing the images to speak for themselves and the histories to spark the imagination, although the photos tend to be chosen with care and the epigraph is clearly meant to evoke strong emotion and philosophical contemplation. Care is also given to warn readers not to go exploring the actual ruins without proper planning, precautions, and knowledge of how to do so legally and safely, and to be aware that however abandoned a place seems, someone owns it and might not care for trespassers. The introduction also offers theories about why people are drawn to ruined places and what makes one more intriguing or valuable than another.