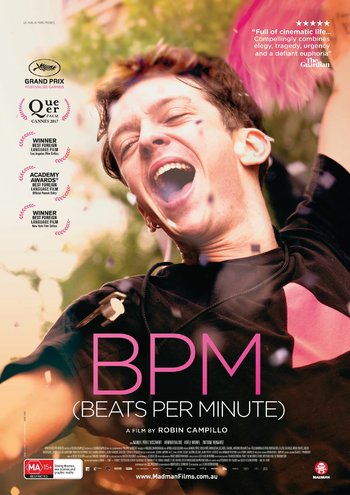 BPM (Beats per Minute) also known as 120 BPM (Beats per Minute) (French: 120 Battements par minute), is a French drama film from 2017, directed and co-written by Robin Campillo. Based on the real live experiences of Campillo and script co-writer, Philippe Mangeot, the story is set in the LGBT community of Paris in the early 1990s, smack in the middle of the AIDS epidemic, and follows the Paris chapter of the activist group ACT UP, as they struggle to spur the French state into action in the fight against the epidemic.

The story unfolds from the perspectives of the HIV-negative Nathan, a more moderately inclined newbie in the organisation, and the HIV-positive Sean, an experienced member who favors a more radical approach. As they participate in the organisation's meetings and demonstrations, Nathan and Sean fall in love, and what starts as a sexual relationship, soon becomes gradually more serious. Unfortunately, Sean is already exhibiting signs of the disease's progression...