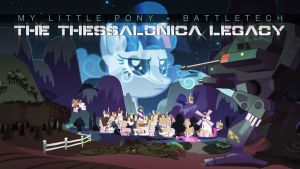 A My Little Pony: Friendship Is Magic/BattleTech crossover fanfic by Dashukta (complete; 18 chapters long plus notes). Can be found at the following links:

Note that no prior familiarity with either universe is required to read and enjoy the story.

In the 31st Century, humankind has spread to thousands of planets in the Inner Sphere. Once united under the glorious banner of the Star League, the Successor States and their noble houses now fight bitter wars over the scraps of empire. When a JumpShip carrying a special task force from the Federated Suns suffers a catastrophic misjump, the occupants find themselves stranded above a strange, beautiful world at once alien and eerily familiar.

Meanwhile, in the peaceful realm of Equestria, Ponyville's resident bookworm , Twilight Sparkle, has stumbled upon hints of a secret buried for centuries. A secret that may lay bare long-forgotten aspects of Pony history and culture.

Our story begins on the planet Valexa, where the beleaguered Militia has launched a last-ditch effort to call for help against overwhelming odds.