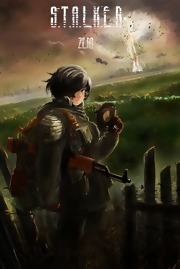 Welcome to the Zone
"Have you even told her what's waiting for her up there?"
"I told her everything. How practically nowhere is ever safe. How all of the mutants that wander around will want to make her into their dinner. How pretty much all of the people she meets will either want to take everything she's got and shoot her dead, or they'll want to do something even worse. You know, the basics."
— How Sidorovich described the Zone to Monty

is a fanfic by TheannaTheWhite

During the Spring Familiar Summoning Ritual, Louise, who has a history of failing horribly, fails even more horribly than usual and manages to pull herself into a charming region between the Ukraine and Belarus. Fortunately, she is not the first this has happened to, as she finds a friend/mentor in Siesta, a maid from the academy who has suffered a similar mishap and has gotten to know the Zone quite well.

Originally hosted on FanFiction.Net, the author's account was taken over by a hacker and the story deleted. Another writer on the site had a back up and uploaded it

. This is not updating, as TheannaTheWhite has started a rewrite and moved to SpaceBattles.com. The tropes here apply to the new story, but still fit the old one for the most part.

, the author has effectively abandoned the fic for multiple reasons.