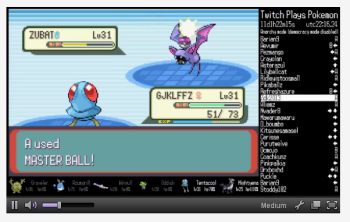 4,000 people playing one game of Pokémon Emerald got a Master Ball, couldn't keep it, and wasted it on a freaking Team Aqua Grunt's Zubat within 10 minutes.Note Does this remind you of anything?
Advertisement: