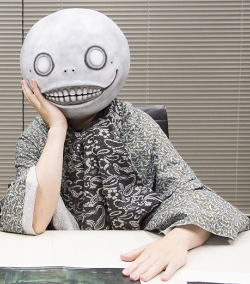 Yoko Taronote That name is in Eastern order; his family name is Yoko. (born June 6, 1970) is a Japanese video game director and scenario writer, best known for being the creative mastermind behind Drakengard franchise.

Described as iconoclastic and something of a loose cannon by those around him, Yoko has gained a fair amount of recognition for his unique storytelling approach. Compared to most JRPG's, which tend to be more on the idealism side of the Sliding Scale of Idealism vs. Cynicism, Yoko's games are instead inspired by the bleak storytelling of titles like Neon Genesis Evangelion, Puella Magi Madoka Magica, and Berserk. In other words, his games have a uniquely dark, relentlessly oppressive tone, with characters that are less than virtuous, often with unique, bizarre quirks. There are also very strong elements of Deconstruction and satire present, frequently parodying, lampshading, subverting, or mocking various JRPG and anime conventions. Additionally, his works also tend to contain various subjects commonly viewed as taboo, most notable but not limited around sexuality and the like. A big root of this is his fascination with the tendency for video games to be centered around mass violence and murder and how nonchalantly and casually many games and players treat it, to the point where both Drakengard 1 and NieR attempt to justify and contextualize why someone would do such a thing. Yoko has explained that he feels he must do this because there's no way his games could compete with the likes of Final Fantasy or Dragon Quest if he didn't try to stand out somehow.

He is equally famous for being a Trolling Creator, including unusual gameplay design elements to engage in Player Punch to great effect. Drakengard became infamous for its multiple endings which became progressively more difficult to unlock while simultaneously becoming more bizarre, depressing and surreal, culminating in an elaborate Gainax Joke Ending which royally pissed fans off. NieR is known for its unique use of New Game+, offering scenes and additional dialogue which completely transform your understanding of the narrative.

His rise to fame has been quite slow, as Drakengard was a cult hit at best. However, NieR ended up gaining a strong reputation as a Cult Classic over time, and its sequel, Automata, was met with financial success and critical acclaim, turning him into a well-known creator. Various interviews and blog entries by Yoko have since been translated, giving more insight into his opinions on game design and the creative process. He is, as you might expect, a rather strange fellow: a Reclusive Artist, who believes interviews to be a boring chore and frequently hides his visage via masks and sock puppets. Interviews with him paint him as a rather modest if quite cynical man, grateful for the opportunities he's been given and for both Square-Enix's and the fans' support.

On occasion he also works outside of the gaming scene, be it either supervising side materials such as the YoRHa stage play, or creating original works such as Thou Shalt Not Die.