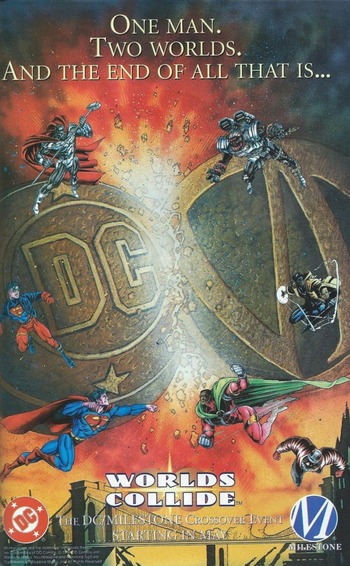 Worlds Collide is the 1996 crossover between DC Comics and Milestone Comics, marking the first encounter between the two franchises.

The story deals with Fred Bentson, a mild-mannered postal worker living in the city of Dakota in the Milestone Universe. Having been exposed to residue from the Big Bang, the Mass Super-Empowering Event that created the likes of Static, he gained the ability to cross realities, being a mailman in the wonderful city of Metropolis in the DC Universe. However, this causes him to suffer from major insomnia as he doesn't actively sleep and he seeks help. His "help" ends up being worse as various figures seek to gain his increasing powers, only to transform him into the vicious god-like Rift. Can the heroes of two worlds work together to stop this being or is all of reality doomed to be a play-thing for a Reality Warper?

The story kicked off in the beginning of the Superman storyline The Fall of Metropolis and weaved its way through Superman: The Man of Steel, Steel, Superboy and all of Milestone's then-running comic line.

Has no connection to the the fanfic of the same name nor the similarly-themed crossover between Sonic the Hedgehog (Archie Comics) and Mega Man.