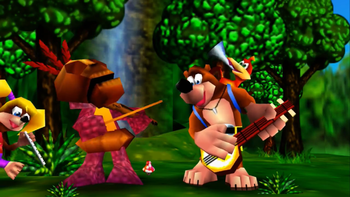 The start of an amazing adventure.
Advertisement:

What did you expect from an Adventure Duo named after musical instruments?

Banjo-KazooieNot only does the original game boast irresistibly catchy melodies that have many players almost subconsciously singing along, but Grant Kirkhope is a master of the Variable Mix, with the hub theme and all nine level themes shifting instrumentation and tone to fit different areas. Interestingly, all of the main level themes have either C major or C minor as their main key.

Project Dream (what Banjo-Kazooie was originally going to be)