is a verse of closely related webcomics by Merlin Missingham set in the world of "LaRaGa." 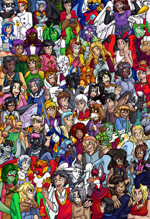 the thumbnail of Volume 47 of Random Encounter.
The flagship comic, Random Encounter, focuses on the students and faculty of Dhark's Hero School, which gives the site its name. Other comics include:
Advertisement:
Ongoing Comics
Finished Comics

A running theme is the persecution of "Tricksters", worshippers of Jake, god of lies and illusions, who has made an enemy of the other gods, making his cult anathema to all others, with treatment ranging from grudging toleration to summary execution.

The site also adopted The Dragon Doctors when its author finally gave up on The Duck as host, but despite frequent cameos in either direction, said comic takes place in a very different setting.