Web Video / Arthur vs. The Druids vs. The Grail 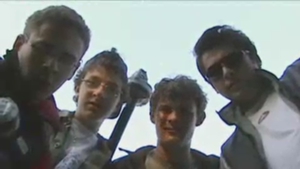 From left to right: Robin, Arthur, Tristian and Lancelot
Advertisement:

The Arthur vs. the Druids vs. the Grail trilogy was the first series of films made by RMA Studios, the creators of Stupid Mario Brothers and Youtube News. The series is a comedic retelling of the Arthurian legends, drawing heavy inspiration from Monty Python and the Holy Grail and Spamalot. The first film was originally created for an English class project during 2005, but two more followed. After the original trilogy, more films were made, although RMA Studios seems more than reluctant to release them.

Films in the series include:

Arthur vs. the Druids vs. the Grail:

The Revenge of Morgana:

The Return to Mount Dune Tah Too Tae: