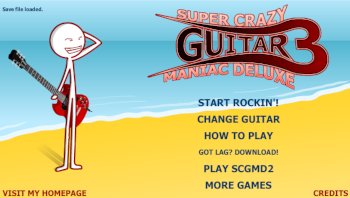 Super Crazy Guitar Maniac Deluxe, or SCGMD, is a series of flash rhythm games that are played using the computer keyboard. The premise is that a stick figure is playing the guitar, and the animation of the guitar player gets suitably more epic the longer the player gets a combo. There are two different kinds of notes in the game: basic notes that are represented by arrow keys, and hold notes that are represented with the asdf keys (or the 1234 keys).

There are also different achievements in SCGMD, which unlock new guitars. The guitar currently being used determines the look of the note track and is shown in the animations with the stick figure.