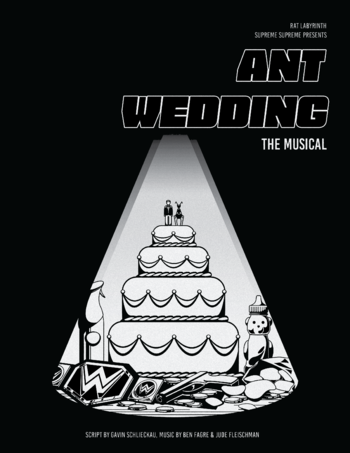 Ant Wedding is a comedy musical from Rat Labyrinth Supreme Supreme.The show premiered on June 15, 2019 at the Middleton Performing Arts Center, and was released on YouTube [1]

In the far future, the planet has been destroyed by nuclear war. Radioactive ants and humans have fought for centuries. The ants have survived by marrying into other species, but now the only life on earth that remains are ants and humans. The two species must learn to overcome their differences and learn to love each other, but mistrust and conspiracy lurks in the shadows. Will love prevail, or will life as we know it be eradicated?

The show stars Ben Fagre as Tom Stonepiledriver and Z Salyapongse as Princess Acid. The script was written by Gavin Schlieckau and the music by Ben Fagre and Jude Fleischman.