Series / Případy 1. oddělení
aka: Cases Of The First Department 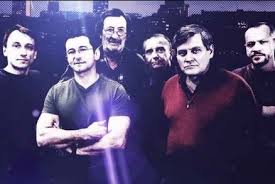 The talented one, the awesome one, Lens Flare, the experienced one, outsider, incompetent boss and the tough one.
The Cases of the 1st Department (original title Případy 1. oddělení) is a Czech series that premiered in January 2014 on ČT1.note public mainstream broadcaster Second season ran in 2016. The series is a Police Procedural inspired by real cases that were investigated and solved in Prague and surrounding regions in the Nineties and the Aughts.
Advertisement:

The 1st department is an elite unit of the Police of the Czech Republic with a solve rate for murders of about 95 percent. The department deals with cases of murder, attempted murder, manslaughter and other serious crimes.

The series was co-written by Josef Mareš (a real policeman and long-time head of the 1st department) and Jan Malinda who works as a journalist. The Cases of the 1st Department can boast of being extraordinarily authentic and precise in the description of police work, slang, methods of investigation, co-operation with other police departments, public prosecution and forensic experts in present-day Czechia. The police often know quite soon who committed the crime, but they have to figure out how to bust them, get them to confess and find conclusive evidence.

The series has a top notch A-star cast in the main roles, however, the perpetrators are often played by less known actors which adds to its unsettling feel.

Tropes of the 1st Department: