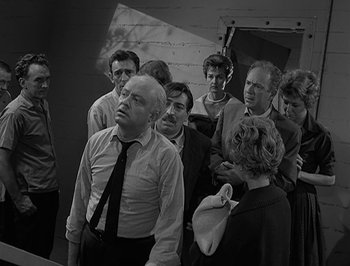 "I wonder if we weren't destroyed even without it."
Rod Serling: What you are about to watch is a nightmare. It is not meant to be prophetic, it need not happen, it's the fervent and urgent prayer of all men of good will that it never shall happen. But in this place, in this moment, it does happen. This is the Twilight Zone.
Advertisement:

It's evening in a typical suburban community, where Dr. Bill Stockton is enjoying his birthday party with his wife Grace, their son Paul, and their group of friends from all over the neighborhood. Bill is a beloved member of the community, a good friend and doctor to them for over twenty years, healing them and even delivering their children. Everything is fun and jovial, even when mention is made of the fallout shelter Bill has in his basement, until Paul comes in and informs his father that a Civil Defense announcement is on.

Bill turns to it and everyone is horrified to learn that unidentified flying objects have been detected on route for the United States. In this day and age, it can't be anything but nuclear missiles. They have between 15 minutes to half an hour before they hit.

Bill, Grace, and Paul begin stocking their shelter when their neighbors come in one by one, all asking if there's room in the shelter for them. Bill gives them the same answer: there's only enough room, air, and supplies for three people. He offers them his basement, but they're convinced that the shelter is the only way to survive. Eventually, they all start crowding into his house trying desperately to think of a solution. They also realize that not everyone can fit in the shelter, and start turning quite hostile to one-another. Both angry words and punches are tossed around as everyone now plots to get into the shelter using a makeshift battering ram. They tear apart Bill's house as they clamor into the basement and begin ramming the shelter door.

Just as they break through and begin forcing their way inside, another broadcast comes on to inform everyone that there are no nukes on the way. The unidentified objects were just harmless satellites. Everyone breathes a collective sigh of relief.

As Bill and his family emerge from the shelter, everyone apologizes for how they acted and what they said, and offer to pay for the damages, but Bill responds by asking if anyone knows what those damages really are. One of them might be finding out what kind of people we really are. He concludes by wondering, even though they were spared a bomb tonight, if they weren't destroyed without it.

Rod Serling: No moral, no message, no prophetic tract, just a simple statement of fact: for civilization to survive, the human race has to remain civilized. Tonight's very small exercise in logic from the Twilight Zone."
Advertisement: