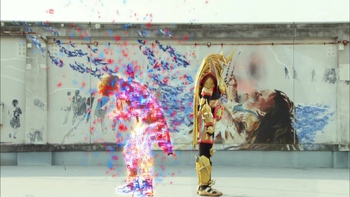 In order to deprive Ex-Aid of his transformation abilities, Cronus decides to target Parado directly. Para-DX without Emu is still not perfect, so he is beaten easily. Even so, Ex-Aid cannot stop chasing Cronus. However, Cronus was planning an underhanded scheme. Nico's game disease, which just started to show symptoms, belongs to that of Gamedeus, the Last Boss of Kamen Rider Chronicle! In order to defeat Gamedeus, Ex-Aid has to defeat both Graphite and Parado. Just then... Parado's hands begin to shake violently.