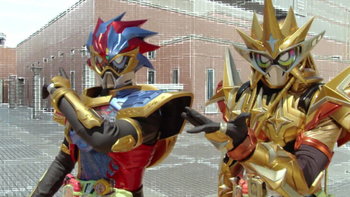 Let's do this, partner!

Parado has been defeated, and Emu has lost the ability to transform into Ex-Aid! Following Parado's annihilation, the other Riders team up in order to defeat Cronus. Brave, Snipe, Genm, and Lazer Turbo, all alternate the Hyper Muteki Gashat in order to counteract Cronus' Pause. Meanwhile, Emu was deep in thought. The fear of death that he felt at the moment of his extinction, even if he was a Bugster, he shared the same feeling as he did in that moment. Just then, Emu takes out the Mighty Brothers XX Gashat.