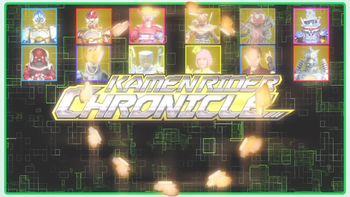 This is it. The end of Kamen Rider Chronicle has begun.

Kamen Rider Chronicle has been reset thanks to Masamune's special ability! Just like Emu with Hyper Muteki, Masamune was the first individual infected with the Bugster Virus in the human race, his hidden power is awakened, and the game is reset to the moment before Emu received the Hyper Muteki Gashat! Finally, with Parado having already been defeated, Graphite is the only game character left in order to clear Kamen Rider Chronicle! Brave and Snipe both challenge Graphite with a burning fighting spirit. Meanwhile, Emu who has lost the power of Hyper Muteki, believes that Graphite infected with Gamedeus' Virus may be the only one strong enough to defeat Cronus. However, Graphite refuses to cooperate with the Riders.