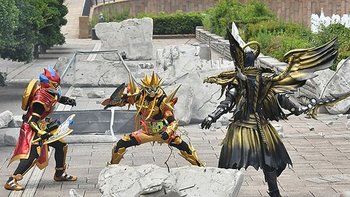 I am God! I'll teach you the truth of your miniscule existences!

Kamen Rider Chronicle’s final boss, Gamedeus, has finally arrived. At the same time the Game Disease dramatically spreads, causing a pandemic. It seems that Masamune had programmed the game to increase the number of infected people.

If Gemdeus is defeated then the infected people will be cured. Emu and Parado transform into Ex-Aid and Para-DX respectively to defeat Gemdeus, but Gamedeus is able to use the powers of all of the previous Bugsters, making it a hard fight.