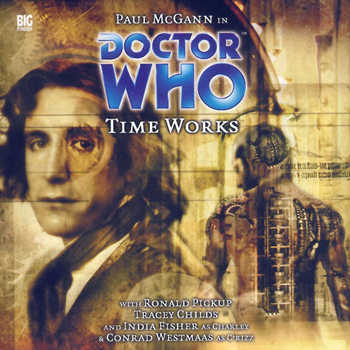 The Doctor's run-ins with Clockwork robots go back even further than you might be aware of.

The Eighth Doctor, Charley and C'rizz arrive on an uncharted planet where the entire population of the medieval-looking city-state is frozen in time. The Doctor strongly warns his companions not to interfere. Charley would very much like to interfere, and gets her chance when the Doctor ends up just over an hour into the past while Charley and C'rizz are stuck at around 5pm. Charley wraps her scarf around the legs of a soldier chasing a young woman, hoping that it'll allow the woman to escape when time starts to tick again. They soon notice the Schizo Tech of the place: the medieval technology is paired with radios and cellphones.

The Doctor soon befriends a young shopkeeper named Vannet, who explains the way the civilisation is structured. Every moment of the people's lives is dictated by the massive clock tower at the core of the palace. The work is for the next generation, since the citizens fully expect to die before the project is complete. Every second needs to be productive for Industry: time-wasters are caught between the tick and the tock by the faceless Clockwork Men. Vannet's own husband was taken from her not long ago. Since she now won't ever be able to have children, she considers her life meaningless, as none of her work would benefit her family.

The Doctor decides to go take a look in the palace and its clock tower — a very strong, culturally ingrained taboo in Industry — and ends up imprisoned by the prince. He pilfers a cellphone and calls Vannet, who rushes to the TARDIS to fetch a time gadget for the Doctor. On her way back, she's almost captured by some soldiers, but a scarf twisted around a soldier's legs — mysteriously appearing between the tick and the tock — helps her reach the Doctor.

Meanwhile, in the Future..., C'rizz and Charley, still in frozen time, enter the palace throne room and see the Doctor — on his knees before some soldiers, with his head about to be cut off. In the shadows, just out of sight, the Clockwork Men whispers at the less industrious soldiers and imprint things into their minds. Charley, a quick learner as usual, first wraps her jacket around the executioner's eyes, then whispers into the King's ears, hoping to change his mind about killing the Doctor.

The Doctor escapes a beheading when a jacket appears around his executioner's eyes and the King has a sudden, if difficult, change of heart. He discovers that the entire project of Industry is the result of a disaster that wiped out its population. The bio-data stored in case of mass genocide was activated by the central computer (The Figurehead) when the planet became viable again, and the people unknowingly work towards completion of the Industry in the hopes of saving their future children from having to live through the same thing again. The Doctor ingratiates himself to the King (to the supreme annoyance of the prince, who would very much like to sit on the throne by now) and vows to make a difference. By the time he reaches 5pm, though, Charley and C'rizz have been captured and subjected to tests. Charley intentionally fails it just out of stubbornness, while C'rizz is just extremely confused about the whole thing (having only recently gotten used to the concept of time in the first place). They're both confronted with the Clockwork Men's ability to punish them based on the probability of possible future actions. They do, however, encounter Vannet's husband, who's not dead at all. He was only removed from society because he was sterile and would be much more useful in the high-tech clock tower. In the middle of all that, Vannet's brother very reluctantly tries to lead La Résistance, but is slaughtered.

The Clockwork Men eventually do slip out of the moment between the tick and the tock. The people are horrified, but soon realise that they can have the upper hand. Because there are only two possibilities: either La Résistance wins, or the uprising fails, lending the people even more strength due to the Broken Masquerade. The central computer is soon defeated, and in the epilogue, a much older Vannet fondly looks back on the revolution.

Some fans who followed the Doctor Who TV series before getting into the audios or skimmed through his timeline of adventures out of order might be surprised that this is the earliest instance in the Doctor's life where met clockwork robots (in a later incarnation, he'd also meet one again, which was written a year before this audio came out). Coincidentally, this story was released shortly before they were heavily popularised in the new series. Just two months later as the second series of the recently revived show aired for the first time, the Tenth Doctor would be pitted against clockwork androids, in an adventure penned by Steven Moffat that was memorable enough to make them iconic foes.