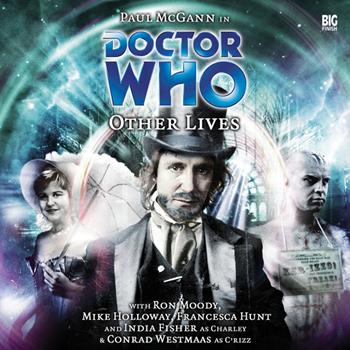 The Eighth Doctor takes Charley and C'rizz to the Great Exhibition in Hyde Park. Charley already visited the Crystal Palace once, but was born long after the Exhibition ended, so she's always wanted to see the show for herself. C'rizz (reluctantly) stays behind in the TARDIS to avoid getting carted off as a freak. Almost immediately, Charley and Eight get separated in the crowd. While Charley accidentally befriends an 82-year-old Duke of Wellington, the Doctor goes off to search for her outside, and realizes he needs money to get back in. Charley and C'rizz leave the exhibition to go search for him, taking the risk of locking themselves out of the TARDIS in the process. Unfortunately, by the time Eight has spent enough time busking to earn a shilling and get back in, he gets caught up in an assassination attempt on Monsieur and Madame de Roche, envoys of Louis Napoleon. He rushes them both into his TARDIS for protection, steps out with de Roche's gun in order to hunt down the assassin, and is immediately arrested when he's mistaken for the assassin. Also, the TARDIS vworps off.

Charley — separated from C'rizz — tries to find the Duke of Wellington, but instead gets mistaken for a whore by a nasty character named Rufus Dimplesqueeze, and is forced to spend the night on the street (after telling him to sod off). C'rizz is, predictably, carted off as a freak and taken prisoner by a vaudeville exploiter named Jacob Crackles. After being forced to tear off his clothes and put on a flimsy thong, he's put into a cage with Crackles' other "actor", a dwarf named Maxi. The Doctor, meanwhile, stages a daring escape from the prison, but gets framed by the real assassin and has to be rescued by... his wife, Georgina.

Georgina's pretty mad for all intents and purposes, but Eight rolls with it. He learns that Georgina's husband Edward went missing a year before, and that she's been looking for him ever since. She assumes that her love simply has amnesia. (Also, he looks odd without his beard.) Eight is very honest with her, but can't get through to her, and finds himself forced to rely on Georgina to get anywhere at all.

The next morning, Charley manages to make her way to the Duke of Wellington's house, who's very concerned about the mysterious disappearance of Monsieur and Madame de Roche. He also quickly figures out that Charley's from the future. Charley decides to impersonate the lady, in order to avoid massive riots and international tension. While riding horseback in massive amounts of padded skirts, she sees a poster for the "HALF MAN HALF BEAST KER-IZZO" and gets the Duke to break C'rizz free. Maxi, however, has no other option in life than Happiness in Slavery, and chooses to stay with Crackles.

With C'rizz on their team, Charley and the Duke are able to fake appearances of both Monsieur and Madame de Roche — as long as C'rizz focuses on a pinkish skin colour and manages not to tear off his terrible hairpiece. The Duke convinces them to make an appearance at the Exhibition.

Meanwhile, the Doctor learns the reason Georgina wants him to be Edward: she only has the house because Edward's uncle, Rufus Dimplesqueeze, allows her to live there as long as she and Edward are married. Since she can't bear the thought of her and her children being reduced to poverty, she clung to the idea of her husband returning just in time. She eventually accepts that Eight is not her husband, but the two of them put on a convincing show and convince Dimplesqueeze to let Georgina have the house even when "Edward" is away on his travels.

In the middle of all that, C'rizz pays Crackles a visit, and grimly explains that he can save him — Crackles could become one of his eternal companions. But C'rizz decides on a Fate Worse than Death for Crackles, who soon enough wakes up to discover he can't feel his legs that his eyes are missing. Maxi's by his side, explaining that, as Crackles always said, they need each other.