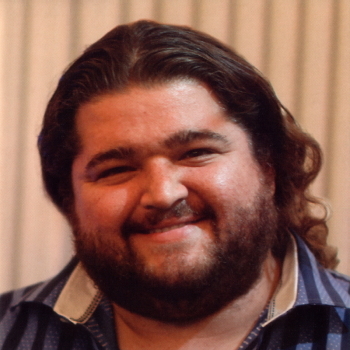 Memories make me want to go back there...note Yes, this picture of Hurley Reyes is the album cover.
Advertisement:

Hurley is the eighth studio album by Weezer. It is their only release on Epitaph Records before they were signed to current label Crush Records. Following the scathing response of their previous album, this album backpedaled on many of the things established with that album, abandoning the dance pop sound that Raditude laid the foundation for in favor of a heavier, more guitar-oriented sound. The band heavily utilized YouTube to promote the album, including cameo appearances in Fred, TheAnnoyingOrange, and Tay Zonday's videos.

It features actor Jorge Garcia on the cover, who is famous for his role as Hugo "Hurley" Reyes on the drama TV series Lost. Weezer originally intended for this to be yet another self-titled album, but quickly realized that fans would retrospectively know it as The Hurley Album to separate it from the band's other self-titled releases, so they decided to just straight-up call the album Hurley instead.

Hurley unfortunately remains Weezer's worst-performing album, selling even less than what Pinkerton did at release. While the album charted at #6 on the Billboard 200, it quickly dropped off to #24 before disappearing from the charts entirely. Only two singles spawned from the album: "Memories" which was featured in the film Jackass 3D, and "Hang On" which features Canadian actor Micheal Cera on backing vocals.

Trope-making is a family tradition