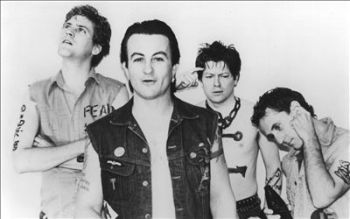 Where to begin? Fear is one of the most infamous bands to emerge from the Los Angeles punk rock scene, known best for their politically incorrect lyrics, insane live shows, and for having Flea in the band in the earlier days. Formed in 1977 in Los Angeles by singer/guitarist Lee Ving, bassist Derf Scratch, guitarist Burt Good, and drummer Johnny Backbeat, the band released one single, 1978's "I Love Living in the City" before Good and Backbeat left; their spots filled in by Philo Cramer and Spit Stix almost immediately afterward. Shortly afterward, the band was approached by Penelope Spheeris with an offer to be in her movie, The Decline of Western Civilization. The band accepted the offer, appearing onscreen pissing off their audience when they weren't playing music, while the film went unnoticed by most people in the mainstream.

...except for John Belushi, that is. Belushi thought the band was hysterical, and attempted to get them on the soundtrack to one of his films. The studio refused, so Belushi offered them a spot on the Halloween Episode of Saturday Night Live as compensation, complete with an audience of actual punks to slam-dance. Predictably, this didn't end well...for the SNL crew. The publicity from the show led multiple punks to claim that seeing them on SNL was their "Beatles on Ed Sullivan" moment, skyrocketing Fear to...slightly larger cult status. Over the next few years, the band went through a few lineup changes, releasing five full length albums, and achieving cult status due to various covers, video game soundtrack appearances, and scattered shows here and there in between recording albums and pursuing other duties. The band is still going strong today after thirty-seven years of playing to audiences across the globe, and routinely makes appearances at festivals such as Warped Tour and SXSW.

Tropes that apply to Fear: