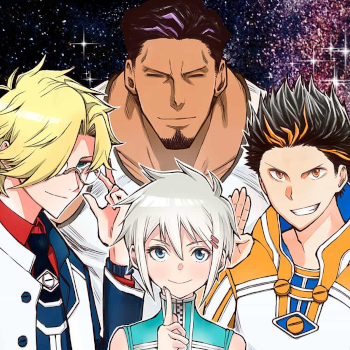 Agravity Boys is a space comedy manga written and drawn by Atsushi Nakamura. It began serialization in Weekly Shonen Jump in December 2019, and ended after 50 chapters in January 2021. It can be read in English officially on Viz Media's website

Four young male astronaunts (Baba, Chris, Geralt, Saga) have arrived at a new inhabitable planet, but they are the last of humanity as Earth was destroyed only days after they launched into space.

On the new planet α-Jumbro, a powerful and self-admittedly sadistic inter-dimensional being appears before them. This "Higher Being" promptly begins shenanigans by testing the friendship of the boys by offering them granted wishes.