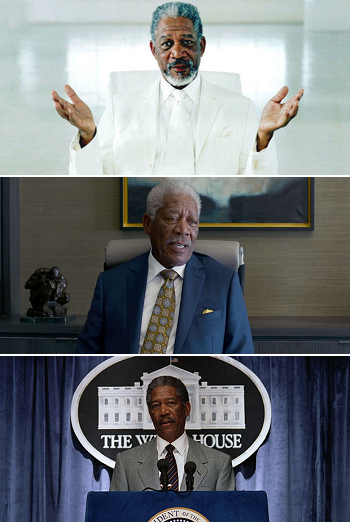 This is not entirely the fault of casting directors. When Ed O'Neill left Married... with Children to spread his wings as a dramatic actor, audiences laughed the instant he appeared onscreen in The Spanish Prisoner. The extreme example of this is I Am Not Spock (and also I Am Not Leonard Nimoy).

Meta Casting is playing off this Type Casting to push it into another realm of familiarity.

Tropes Are Not Bad. There are some actors whose typical role has become known so well that as soon as you see them in a movie, whatever it is, you know it's going to be awesome/hilarious/full of asskicking/etc. (CinemaSins, for example, lampshades this with the comment whenever he appears in a movie in a normal presence, "Liam Neeson is not killing anyone in this scene.")

When lampshaded in the work itself, this becomes Adam Westing. The opposite is, naturally enough, Playing Against Type (subtropes of which include Tom Hanks Syndrome, Leslie Nielsen Syndrome and Playing with Character Type).