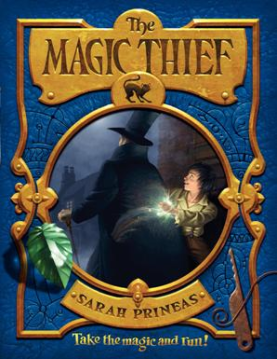 ''Quick hands.''
The Magic Thief is a fantasy quartet for children written by Sarah Prineas and featuring illustrations by Antonio Javier Caparo. It's published in the United States by Harper Collins.
Advertisement:

The three books in the quartet are:

The Magic Thief follows Connwaer, a young pickpocket in the city of Wellmet, who makes the mistake of stealing a "locus magicalicus", a stone that holds a wizard’s power. Touching a wizard’s locus stone is an almost-certain death sentence, but Conn somehow manages to survive. Curiosity convinces Nevery, the owner of the stone Conn tries to steal and recently returned to the city after a decades-long exile, to take Conn in as a servant, though Conn thinks he’s going to be the wizard’s apprentice. Nevery has been allowed to return to Wellmet in an effort to help stem the leak that seems to be draining the city’s magic. Conn seems to know more about it than anyone gives him credit for, but will he be able to convince anyone in time to save the city’s magic?