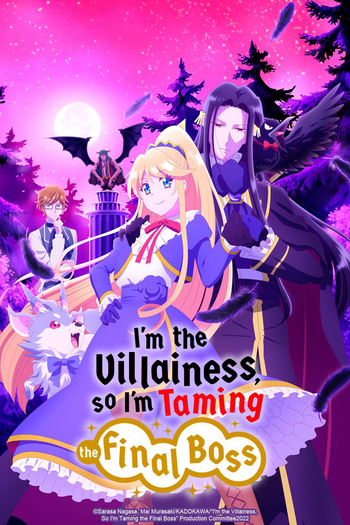 She'll get her happy ending, one way or another.
Advertisement:

Aileen Lauren D'Autriche is publicly dumped and shamed by her fiance, Prince Cedric. The shock awakens her memories of a previous life where she played an otome game whose plot she is now living out as the villainess. Now, with knowledge of how the next two months are going to play out, Ailene tries to avert her doom by proposing marriage to the final boss of the game.

I'm the Villainess, So I'm Taming the Final Boss is a light novel written by Sarasa Nagase and illustrated by Mai Murasaki. It is also adopted into a manga by Anko Yuzu. Both versions have been licensed into the English language by Yen Press.

An anime started on September 24, 2022. It can be seen on Crunchyroll.