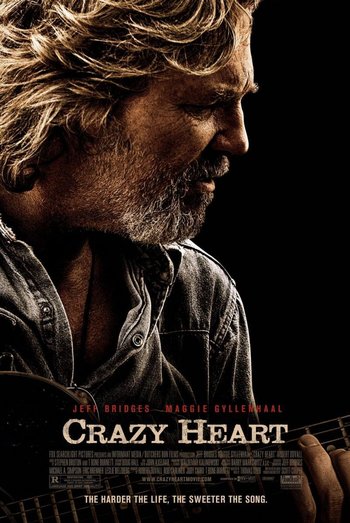 "I'm Bad Blake. When I die, my tombstone will have my real name. Until then, I'm gonna stay Bad."
— Bad Blake
Advertisement:

Crazy Heart is a 1987 novel by Rhode Island College professor Thomas Cobb that later became a 2009 film written and directed by Scott Cooper and starring The Dude himself, Jeff Bridges.

"Bad" Blake is a down-on-his-luck Country singer who nowadays travels on the road to perform one night stands wherever he can get them. His protegee, Tommy Sweet, is now a bigger star than him, and that gets on his nerves. One day, reporter Jean Craddock comes along and asks for an interview. He complies, and the ensuing relationship with her and her son Buddy sets up the road to get his life back on track. The film became a sleeper success, in great part because of buzz for Jeff Bridges' performance, and earned him the Oscar for Best Actor. The film also won the Oscar for Best Original Song ("The Weary Kind"), and Maggie Gyllenhaal was nominated for Best Supporting Actress.