Literature / A Trial of Blood and Steel 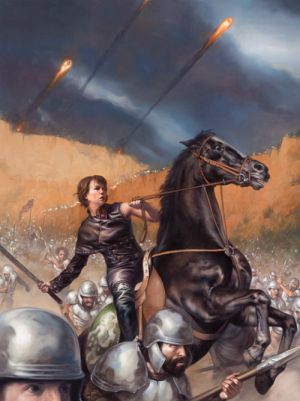 A Trial of Blood and Steel is a fantasy quadrilogy by Joel Shepherd, consisting of Sasha, Petrodor, Tracato and Haven. The series starts in the small village of Baerlyn highland nation of Lenayin with former princess Sashandra Lenayin training in swordwork under Kessligh Cronenverdt. Her sparring against the other villagers is interrupted by the arrival of her brother Prince Damon with a company of soldiers. A lord of a neighbouring province has been slain by another lord and the King has dispatched Damon to clear up the conflict before it spirals out of control. Things are, of course, more than they seem and from there the series spirals into a web of politics, religion and war that takes the cast across the continent.
Advertisement:

Although the series is best classed as fantasy there is only one definitely supernatural element, with all others being at most Maybe Magic, Maybe Mundane, and one non-human race, the very elf-like serrin.