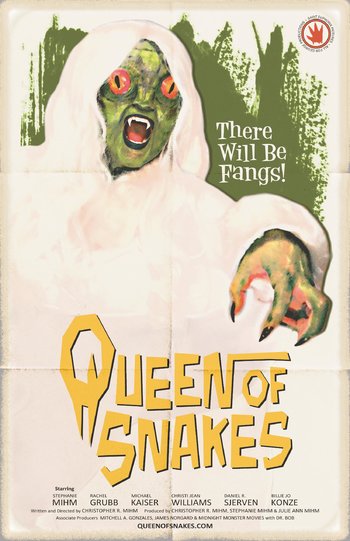 THERE WILL BE FANGS!

Queen Of Snakes is the fourteenth film by Christopher R. Mihm and the fourteenth film in the Mihmiverse Shared Universe. It is the first of Mihm's films to be fully rendered in color, in contrast to his earlier films which were Deliberately Monochrome.

Set sometime after the events of The Giant Spider, the film focuses on the reclusive Mrs. Crawford. Embittered at the world after being paralyzed by her daughter, Mrs. Crawford has little to occupy her time beyond listening to the local gossips and interfering in her daughter's love life, which is limited to increasingly infrequent dates with a man named Henry. This changes after a package is accidentally delivered to the Crawford residence, containing an amulet that gives Mrs. Crawford a connection to an ancient Norse goddess known as The Queen of Snakes. This leads to various shenanigans, as Mrs. Crawford starts to use her control of a monstrous snake-woman to spy on her daughter's suitor and his other woman.