Film / A Day at the Races 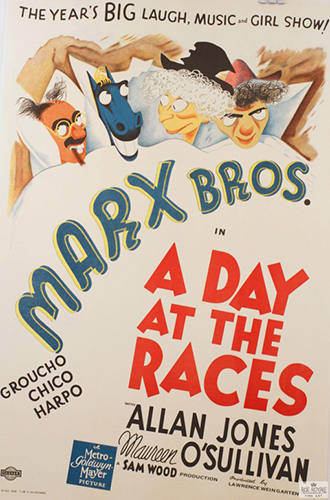 The One With… horseplay where a sanitarium is at stake.

The Marx Brothers' seventh film, released in 1937 and following closely in the same mold as their previous one, A Night at the Opera.

Judy Standish's (Maureen O'Sullivan) sanitarium is under threat of being taken over by unscrupulous businessman J.D. Morgan (Douglass Dumbrille), who wants to demolish it and expand his real estate monopoly. The only hope for Judy is if she can keep as a permanent patient the wealthy hypochondriac Mrs. Upjohn (Margaret Dumont), who will only stay if the sanitarium hires her favourite physician, Dr. Hugo Z. Hackenbush (Groucho Marx). Unfortunately for Mrs. Upjohn, Hackenbush is actually a confidence-trickstering veterinarian, who has to avoid being caught out by either Morgan's cronies, the Florida Medical Board or Mrs. Upjohn.

Meanwhile, Chico Marx and Harpo Marx play a sanitarium worker and a former jockey who have to save Hackenbush from a Femme Fatale employed by Morgan, while simultaneously trying to get the racehorse owned by Judy's fiancée Gil (Allan Jones) into race-winning condition.

Not to be confused with the 1976 Queen album A Day at the Races, which was named after the movie.

In addition to the usual tropes exhibited by the Marx Brothers, this film provides examples of: