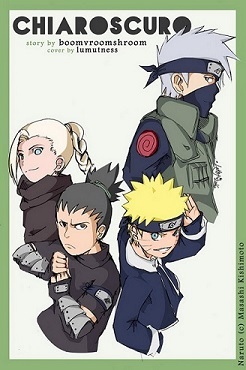 But I never forgot my father's boogeyman, and all throughout my life, his words – words that he didn't even know I had heard – would haunt me: "Those who walk the shadows may very well become one with them."
Chiaroscuro

is a Naruto fanfiction by Boomvroomshroom

. It is set in an Alternate Universe where Shikamaru is born hardworking like his mother instead of lazy like his father. Because of that, he beats out Sasuke for Rookie of the Year and ends up being put on Team 7 under Kakashi along with Ino and Naruto. (Sasuke is put on Team 10 with Asuma, Hinata, and Choji; Sakura is put on Team 8 with Kurenai, Kiba, and Shino.)

Though it starts out similar to canon, it very quickly devolves into something a lot more complex, involving original missions and plenty of scheming within Konoha and the rest of the ninja world. Despite the "smarter and darker" setup, Chiaroscuro does well in avoiding the overpowered hero pitfall by consistently setting up believable challenges and mistakes, caused by incomplete information rather than logical errors. It also regularly features many different types of intelligence, such as strategy, logic, deception, self-awareness, and maturity, and with it, strong yet relatable characters.

With its distinctive blend of humor and drama, Chiaroscuro definitely lives up to its name.

(Not to be confused with Chiaroscuro, the art trope.)