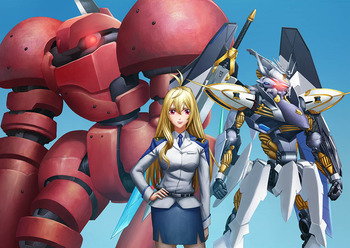 Mana...a world where humanity can manipulate information and materialize everything they wish.

Angelise Ikaruga Misurugi is the Crown Princess of Mana's mightiest nation with its role as the keeper of the Dawn Pillar. Despite losing the Iaria tournament, her birthday was tomorrow when she would be Empress and...

Hold on...what's the hell is Cypha doing here? Did she just kill everyone in the Iaria stadium? Now Signum's in the picture? And an unknown OC in the mix? What's going on here?

is a crossover story between the Lyrical Nanoha franchise, Cross Ange, and Full Metal Panic!, written by JameyoftheMegacosmos, where the former princess's misfortune does not cast her off to Arzenal. Instead, she and her trusted maid are taken in by Signum as part of a bargain from their Mysterious Protector. Under the protection of the Time-Space Administration Bureau, Angelise and Momoka are now stuck on Midchilda to learn a new lifestyle until they can return home.

So far, the list of works will be included regarding the Nanoha franchise:

Expect more information as the fic goes on.