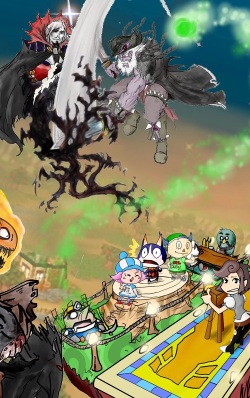 Clockwise you have Dracula, Cervantes, Headless Horseman, and Donna Levman.
"Our humble community, called MYM for short, thrives on the tantalizing promise of the “what if..” Primarily, we take one of the world’s most inclusive and amazing fighting games, Super Smash Bros, and we envision what it would be like if our favorite characters (Nintendo or otherwise!) were a part of that magic. Since this is an exercise in imagination rather than practicality, there are no limits, anyone and anything is fair game for MYM. In this community passion is king, and the more your creativity runs amok, the better. Designing movesets is a fun, deep and rewarding past-time, and we cannot wait to see what you cook up."
-The Bunker, MYM's community archive

What is Make Your Move? At its core, it's essentially an ongoing series of contests for creating hypothetical movesets for the ever-popular Nintendo franchise Super Smash Bros.. Not just the usual Nintendo and video game fare, mind you. Movesets are typically created for characters from all walks of media, from TV shows, anime, fan fiction, and even Real Life! Likewise, movesets are judged not by their likelihood of being implemented in future SSB games, but rather showcasing creative flair for designing well thought-out concepts.

Or at least, that's the idea. In actuality, within its small community in the Smashboards, MYM has been a huge source of internet drama, MYMemes, and general politcal mayhem that would make EVE Online blush. Thus, it's easily the grandest scale contest for making kinda-sorta movesets for Super Smash Bros except not really ever.

the general hub for all news relating to the current MYM and information on how to participate, and see The Bunker,

the source for all things relating to MYM history, as well as special blogs written by more prominent members.

Examples specific to the movesets and story modes themselves: