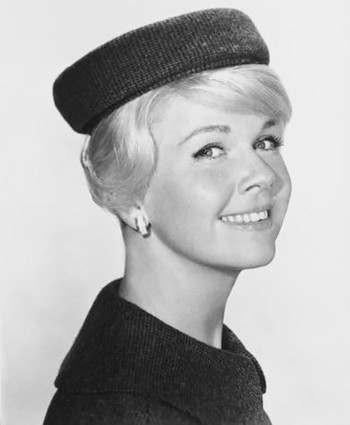 Doris Day (born Doris Mary Ann Kappelhoff; April 3, 1922 – May 13, 2019) was an American actress, singer, and animal welfare activist. One of the most popular stars at the tail end of The Golden Age of Hollywood, Day appeared in a variety of comedies, dramas, and musicals, but began as a Big Band singer before leaving to start a solo career.

Her first movie was 1948's Romance on the High Seas and she acted in films for twenty years until 1968. She later starred in a television sitcom called The Doris Day Show from 1968 to 1973, and had other TV shows sporadically through the 1970s and '80s, all while continuing to record music; her 29th studio album was released in 2011.

She was the biggest box-office draw for four straight years in the 1960s, and even earned an Academy Award nomination for Pillow Talk (the first of three hit comedies she made with her good friend Rock Hudson). She was also a fixture on the pop singles charts from the late 1940s through most of the '50s (though her popularity in that arena declined with the advent of rock and roll), with hit songs including "Whatever Will Be, Will Be (Que Sera Sera)," "Secret Love," "It's Magic," "A Guy Is a Guy," and "Everybody Loves a Lover," to name a few.

Day became an animal welfare activist and founded numerous charities for abandoned and abused animals of all kinds. She occasionally gave interviews but rarely made public appearances. She did, however, receive Lifetime Achievement awards as well as the Presidential Medal of Freedom.