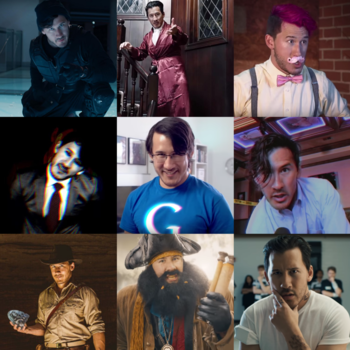 A selection of characters played by Mark. Two of which are himself. note  From top Top left to Bottom Right: Mark from A Heist with Markiplier, Mark from Who Killed Markiplier?, Wilford Warfstache, Darkiplier, Googleplier, One of the Jims, Illinois, Captain Magnum, Yancy.
Advertisement:

Mark has made many characters throughout his time on Youtube, many of which he has played himself. While starting small, the amount of characters has expanded greatly.