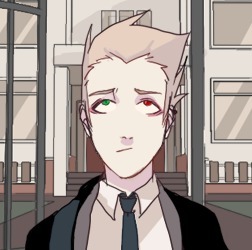 The protagonist of the story, Herz is an seventeen-year old Eldritch Abomination who fights space demons. He's also very mentally unstable, but hides it in front of his friends so they wont worry. It's incredibly hard for him to die, but that doesn't mean he doesn't get injured, and he gets maimed and abused multiple times, not only by the space demons he fights, but by other kids that don't like him. He never fights back, despite having more than enough strength to kill them several times over. 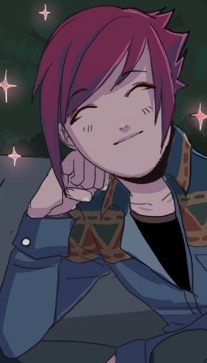 One of Herz's best friends (also one of his only friends), Jura is kind to everyone (except Vanilla) and simultaneously loved and feared by the school he goes to. He always worries about Herz and is just a Team Mom in general. 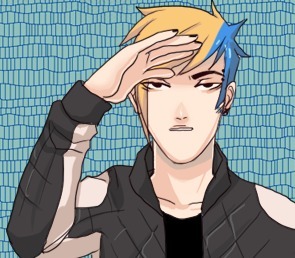 A lazy junkie just out of school, Vanilla was involved with gangs before he met Herz and ended up sacrificing the trust of his fellow gang members for him. As a result, he and Herz became best friends, as well as he and Jura, although they're constantly fighting. He loves money, alcohol, and sleeping, and his morals are rather loose, a big contrast to Jura. He has a heart for music and plays in a band with a few of his other friends.

One of Herz's older brothers. He is a total Jerkass in general and doesn't try to hide it. However, there are some moments (although they're few and far between) where he shows kindness to Herz.