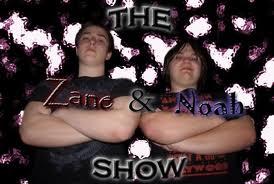 "This is the Noah and Zane Show-a! This is the Zane and﻿ Noah Show-a!
I'm the brain and he is Balboa, one in the fast lane the other is slow-a! You know-a!
Spend most of my time in pain and being detained while he abstains from being vein to gain the reign!
We are brothers from birds of a feather, we become an unbreakable chain!
We become an explodable force like butane, I'm the left and he's the right brain!
He likes to explain while I shout profanes, one of us is Noah and the other is Zane!"
— Ashtorothe's Fan Rap

Zane and Noah are two young comedians from YouTube with a variety of videos consisting of various skits. There is small supporting cast, with people such as Matthew, the friend with a car, and a few others. From Music Videos to Deconstructive Parodies, from personal challenges to whatever else; the two are dedicated to changing comedy, without restrictions.

Tropes that apply to The Zane And Noah Show: