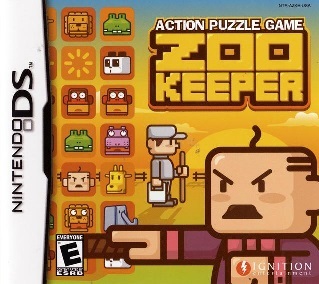 Zoo Keeper is a Match-Three Game developed by Kiteretsu. It was originaly a web game

, but due to great popularity in Japan it got ported over to arcades, the Game Boy Advance (as Zooo), the Playstation 2 (as Zoo Puzzle), the Nintendo DS and the Nintendo 3DS (which is exclusive to Japan). It went on to receive smartphone ports as well as a competitive online version called Zookeeper Battle.
Advertisement:

The game plays much like Bejeweled in that you match a minimum of three blocks in a row to erase them, but unlike how that series worked in the beginning, it wisely allows you to keep moving tiles while a chain is progressing to extend it as further as you can.

Gameplay modes from the DS release include Normal Zookeeper (meet a quota of every animal), Tokoton (get 100 tiles of any animal), Quest (clear a variety of objectives as quickly as possible) and Time Attack (same as Zookeeper but with a six-minute limit). The 3DS remake adds a "clear this stack in a single move" Puzzle mode and a Encho Battle mode with the rules from Zookeeper Battle.