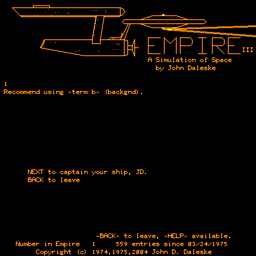 Empire is a series of games for the PLATO network, written beginning in 1973 by Iowa State University student John Daleske with assistance from Silas Warner. Along with Maze War, they are among the first online multiplayer shooters.

Empire I was a Turn-Based Strategy game for up to eight players. Each player was the head of a planet's government, responsible for economic development, building spaceships for either trade or war, and if they want to, conquering the other planets. Empire I was erased to make room for Empire II, but Silas Warner revived Empire I on the PLATO network as Conquest.

Empire II removed all the strategy and was purely tactical. It was a Top-Down View realtime 2D Shoot 'em Up, for up to 50 players in eight teams. Each player controlled a ship, with a design from Star Trek, moving around and shooting photon torpedoes. Different ship types had different capabilities; the Federation and Klingon-looking ships were average, the Vulcan-looking ships were Fragile Speedsters, and the Romulan-looking ships were Mighty Glaciers. Any ship could be on any team, so an Identify Friend or Foe system told you who was who. Spaceships and torpedoes followed Newtonian physics. Ships were controlled with bow and aft thrusters and rotation thrusters. Space was an 8x8 grid of sectors, and ships moved from sector to sector using Flip-Screen Scrolling. Since you couldn't see the other sectors, enemy ships and torpedoes could come into your sector at any time. If your ship reached the edge of space, it would Wrap Around.

In late '73 and early '74, Daleske rewrote Empire II into Empire III. Space expanded to a 256x256 grid of sectors. Phasers were added to the arsenal. Flip screen scrolling was replaced by ship-centered scrolling, with a variable zoom level. An Action Bar for typing in commands and messaging other players was added, along with a Status Line showing your location, heading, bearing, damage, and energy.

Daleske wanted to re-introduce the strategic elements from Empire I, So he started work on a new version that was both strategic and tactical. With help from new friends Gary Fritz and Chuck Miller, Empire IV was completed by the summer of '76. Empire IV allows up to 30 players in four teams: Federation, Romulan, Klingon Kazari, and Vulcan Orion. Unlike II and III, each team could only use one type of ship. Ships now carried armies for conquest in addition to phasers and torpedoes. Space was a 64x64 grid of sectors, with stars and planets in it, one solar system for each team plus neutral systems. Teams set out to conquer the galaxy by carrying their armies from planet to planet, shooting at other ships along the way. Ship maneuvering was simplified compared to III, but the ships had more detail in other ways: Deflector Shields, cloaking devices, damage repair, engines that would suffer from Overheating if run too hard, and an energy management system that pitted weapons versus shields and engines.

Empire IV was very popular, and spawned derivatives such as Galactic Attack for the Apple ][ and Netrek, one of the first Internet multiplayer games.

Empire I provided examples of:

In addition to all the tropes of Empire III, Empire IV provides examples of: