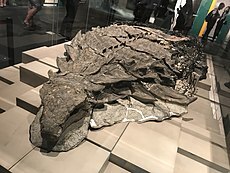 Other than the clubbed Ankylosaurus and Euoplocephalus/Scolosaurus, frequently-portrayed North American ankylosaurs include the club-less Nodosaurus, Sauropelta, Edmontonia, and Gastonia. The European Polacanthus and Hylaeosaurus have been common sights as well because of their historical relevance, while Pinacosaurus is the most-often seen Asian ankylosaur. Among kinds found in other continents you might see Minmi from Australia, as well as a mention of the "Antarctic ankylosaur" Antarctopelta as it was the very first dinosaur found there, though it isn't often named. The animal of the image is the recently-found Borealopelta.

Ankylosaurs from the West: Dyoplosaurus

Ankylosaurs from the East: Talarurus

Ascended Fanon to an Extreme: Tianchiasaurus