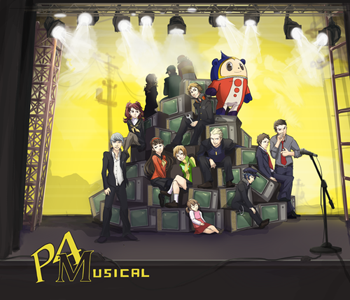 The fog is music to my ears.
Advertisement:

Midnight Channel: The Musical (which was known as Persona 4 Musical before the name was changed) is a fan-made musical adaptation of the video game Persona 4, and was started by brother-and-sister duo of Gina and Jake Smith in late 2012. Much like the original game, a nameless high school student moves to a small, peaceful town named Inaba for a year. Soon after he arrives, though, a series of murders and kidnappings begin, and it quickly falls to the character and an ever-increasing band of friends to stop the culprit by saving his or her victims from the TV World, where monsters called Shadows kill those trapped for too long.

Much of the musical was completed, including the script and a vast majority of the songs in the show. Many of these tracks were put onto the project's Tumblr, and a read-through of the first two of acts of script were recorded and shared online (which can be found here

). The musical itself remained a close adaptation of the game; however, due to the limitations of compressing a 100+ hour game into a three-hour stage performance, as well as to make it more accessible to people who have not played the games before, several major changes were made to the plot.

Unfortunately, plans for theatre performances were halted when Atlus issued a cease and desist order on January 28th, 2014

, and they were forced to take all work related to Midnight Channel: The Musical down. This was likely because Persona 4 already had two stage productions in Japan, with an official musical for Persona 3 running at the time. The musical's songs have since been reuploaded to this location