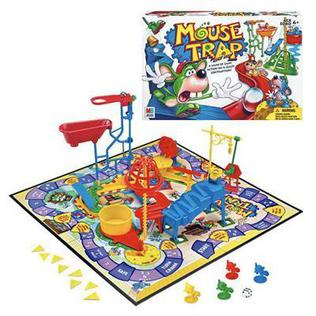 The fun is catching.
"I wanted to play Mouse Trap. You roll the dice, you move your mice. Nobody gets hurt."
— Bob the Tomato, VeggieTales, "The Toy That Saved Christmas"
Advertisement:

Mouse Trap (originally Mouse Trap Game) is a 3D board game for two to four players. Each player is a "mouse" that follows a set path around the perimeter of the board, advancing according to the throw of a single die. Landing on a particular space allows each player to install one particular component of a Rube Goldberg Device that will occupy most of the playfield when completed. There is no finish line or home space; the end of the path is a loop of six spaces. Once the entire device has been assembled, it becomes a matter of elimination by chance. One player's mouse must be on the Cheese space, and another player must immediately land on the Turn Crank space. The contraption is started, and usually (though not always) runs its ridiculous course until it drops a cage over the Cheese mouse, thereupon removing that mouse from play.

The game was introduced by Ideal Toy Company in 1963. Ideal was subsequently absorbed by Milton Bradley, which in turn was assimilated by Hasbro. The pieces have gone through a few name and style changes over time, but the overall contraption and gameplay remain the same.