Series / Escape To The Chateau DIY 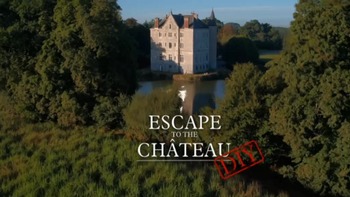 Château de la Motte-Husson
Escape To The Chateau DIY is a Spin Off of the Channel Four Show Escape To The Chateau. The show presents other Expats that have brought Chateaus or are on the hunt for one, the ups and downs of restoring a Chateau and making them earn their keep as a Wedding Venues or Hotels.
Advertisement:

Sometimes the show returns to Dick and Angel Strawbridge who play the part of business advisers or teachers for the skills they have used in their own Chateau.

The Series has about 20/30 episodes per series but the most recent series was postponed due to Covid-19 and will be released later in the year.

However in 2021 the series went though a Massive change, The Strawbridges have withdrawn from the series and now the series is called Chateau DIY with Adjoa Andoh presenting it.

The Series contains the following Tropes: