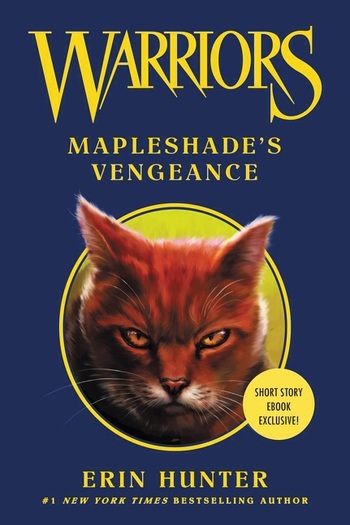 Mapleshade's Vengeance is the seventh novella; one of the three in the Shadows of the Clans compilation alongside Goosefeather's Curse and Ravenpaw's Farewell. It takes place some time after the events of Cloudstar's Journey and not long before Pinestar's Choice.

At a Gathering, there are tensions between ThunderClan and RiverClan due to a recent battle where two ThunderClan cats died (including the leader's son Birchface), but this doesn't stop Mapleshade of ThunderClan from talking to her secret mate Appledusk of RiverClan. She tells him that she's expecting his kits, and he promises that they can still see each other when things calm down. Mapleshade gives her news to the Clan the next day, and when asked about the father she says only that she's raising the kits alone. Frecklewish, the sister of the recently-deceased warrior Birchface, assumes that this is because Birchface is the father, and Mapleshade doesn't confirm or deny it.

One day when the kits are two moons old, Mapleshade is tired of an elder criticizing the kits for not jumping as well as Birchface, and so she sneaks out of camp with them to take them swimming in the river. They enjoy it, but a RiverClan patrol spots them and warns them away. The ThunderClan medicine cat Ravenwing also sees them, and tells her that he's figured out that the father of the kits is Appledusk, not Birchface. He insists that the Clan needs to know the truth, and tells them. Needless to say, the Clan does not take this well, and Mapleshade and her kits are exiled.

Mapleshade tries to take the kits across the river, but it's flooded, and the kits drown; Mapleshade herself only survives because a RiverClan patrol pulls her out in time. Appledusk confesses to the Clan about what happened, and he vows that his loyalty is only to his Clan; he blames Mapleshade for the kits' death, and RiverClan has no interest in letting her stay. She spends the night in a barn, and believes she can hear her three kits crying out for her. The next day she heads into ThunderClan's territory, where she learns from an apprentice that Frecklewish had watched her cross the river. Mapleshade vows vengeance on Ravenwing and Frecklewish, blaming them for her kits' deaths.

The following night, she waits at Highstones and kills Ravenwing at the Moonstone. After this she only hears two of her kits crying for her, and she thinks she needs to kill three cats total to properly avenge them. She decides that Frecklewish will be her next victim, and uses a mouse to lure her to Snakerocks. There, she tricks Frecklewish into leaping at an adder and getting bitten in the face. As they bring her back to camp, unsure if they can save her life, Mapleshade hears only one of her kits calling for her.

Mapleshade decides her third cat to kill will be Appledusk. She traps his apprentice as bait, and just when she's trying to get him to fight her, his new mate Reedshine shows up. Mapleshade goes for her instead, but Appledusk jumps in the way, and he takes the fatal hit. Appledusk's apprentice jumps on her and bites her neck, badly wounding her; she vows to take revenge on Reedshine and Appledusk's bloodline before crawling away. Her third kit vanishes, and she thinks they're free, but also can't find them. She stumbles to the barn where she'd slept before, and falls unconscious for the last time.

She finds herself in a dark place and wonders aloud if it's StarClan; a voice tells her that it's the Dark Forest, and she feels glad, not upset, that she ended up there. She feels like she's found a place where she belongs, and is ready to wreak vengeance for all eternity.

Tropes appearing in this novella: