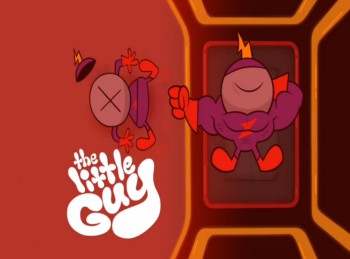 Little does Westley know, he's about to get his big chance.
Advertisement:

We begin with the Watchdogs, sound asleep aboard the Hater ship — all but one. It's just another night working for Lord Hater as the alarm sounds. This is not a drill! The rank and file troop in to watch a video and a lecture from Peepers that indicates their current top priority is to capture and/or destroy the terrible tricksters Wander and Sylvia. The littlest Watchdog in the back is listening intently for all that he can barely see over the heads of the others.

That littlest Watchdog is named Westley. He's gung-ho and eager to prove himself even if he is a klutz no one takes seriously. He dares to dream that he could catch Wander and Sylvia. He'd get to meet Lord Hater. His life would be complete! When Hater drops the Watchdogs on a planet, he rushes off with enthusiasm — and falls on his face. The rest of the Watchdogs march right over him without helping him up. They chase Wander and Sylvia, only for the wily pair to escape. Peepers chews them out for incompetence, and takes off. No one even notices he's not with them at the pickup, so poor little Westley gets left behind! As if that weren't indignity enough, when he calls Commander Peepers to ask that they come pick him back up, hysterical laughter is all that comes through his commlink.

As luck would have it, though, Wander and Sylvia find him dangling from a branch. After some convincing to get Sylvia on board, they help him. Westley declares them his prisoners and that he's going to take them to Lord Hater...as soon as he calls Peepers back and convinces him that Westley has really caught Wander and Sylvia. Peepers, after Westley insists he's sure he's really caught Wander and Sylvia, arranges a pickup point for Westley distant from his current location. Westley tells his prisoners they must march through the hostile terrain to the pickup point — atop a mountain, in the distance, the next morning.

Sylvia would much prefer to just let Hater pick Westley up and leave, but Westley keeps getting himself into trouble and she takes pity on him. Wander and Sylvia just go along with Westley to keep him safe and out of trouble. The "ropes" they have been tied up in are the pair's fishing lines, and they're so loose that Wander and Sylvia have to hold them up. Wander chatters amiably about the interesting sights and sounds they're encountering as they walk, but the little Watchdog refuses to so much as look away from his commlink. As they trek through the planet, the local fauna is super hostile to Westley. And Westley keeps picking the worst possible path to his destination, requiring Wander and Sylvia to save his bacon — repeatedly. Finally, they reach the mountain. Westley refuses to give into Wander's urging to have fun, and his rush up the mountain disturbs a Fire Lion! The lion chases them until Sylvia tricks it into the river below, and Westley shares a high five with his new friends. Wait, what? The Fire Lion thanks them for helping him mellow out, then swims away, happy. Wander points out that sometimes an enemy's not really an enemy — but Westley refuses to buy it. He won't betray Lord Hater! As he backs away, Westley bumps into a hungry Cobra Bear, and gets eaten.

Eventually, after rescuing Westley from having been eaten, they stop for the night. Despite waking up snug and cozy in a pair of pajamas and Wander's Hat doing sleeping bag duty, Westley remains convinced that his prisoners mean him harm. He keeps expecting them to attack. Wander has his blaster! But uses it to start a campfire. Sylvia has a giant stone! It turns out to only be a pot to cook on the fire. Wander whips out a big club! But no, it's only his banjo, so he can play a little tune while Sylvia cooks. Sylvia whips out a giant knife! But she's only chopping veggies for stew.

The stew turns out to be delicious once Westley can be convinced to try it. He even has seconds. He wakes the next morning in Wander's Hat. Their idyllic morning greetings are disturbed as the Hater ship lands. Wander, convinced that Westley has had a change of heart, invites him to join him and Sylvia. Hater and Peepers arrive, and just before they give up and turn around — Westley makes his choice. He points out he's captured Wander and Sylvia. The pair exchange a dismayed, disappointed look, as they're locked up.

Westley, however, is showered with praise. He gets a medal (which is so big it clanks to the ground around him). He gets the accolades and respect of his fellow Watchdogs. He raises his fist and chants, "Hate's great. Best villain." But what's this? His heart is just not in it anymore. Does the little guy feel guilty about handing over Wander and Sylvia after their kindness and friendship? It looks that way.

That night, there's a red alert. Peepers rushes to wake Hater. Together they review a security tape of what happened. Wander and Sylvia make a daring escape! But there's Westley ready to stand in their way! But what's this? The pair have left a bomb trap that goes off just as Westley catches up to them! KABOOM! An explosion! No one could've survived that — not even Westley! Hater gives a rousing speech in memoriam of the fallen warrior before dissolving into sobs.

However, on the surface of the planet they just left, we see Wander, Sylvia and Westley are all fine. Westley faked his own death to get away from Hater without being a constant target of his revenge. Wander gifts him with a beanie that matches Wander's own accessories, and after ducking one last sweep of Hater's ship, Westley goes his own way, his change of heart genuine and complete, happy to be his own person.

Back to the main Wander over Yonder page, or back to the recap.